Great Event Tours, Inc.
UPDATE:  The tour is filling fast, with only a few spots left!  If you are seriously considering joining, please let us know by clicking here and emailing Carsten at cramcke@greateventtours.com

Here's a preview of the tentative 2021 Trains & Grains itinerary

DISCLAIMER:  Please note the word 'tentative' above.  This trip is nine months away, and as I type this, travel to Europe isn't even allowed.  So please understand that nothing, and I mean NOTHING, is written in stone or guaranteed.  But hey, we're not asking for any deposit money, anyway.  More details to come.

Saturday, September 4:  Arrival at our hotel in Eisenach, Germany.  Eisenach is an ICE stop between Frankfurt and Leipzig, making it easy to get to from most airports in Germany, especially Frankfurt.  Plus, it's only an hour from our first event.  The City Hotel Eisenach is an easy walk from the train station.  We'll have a brief reception at the hotel followed by dinner at the 'Kartoffelhaus', a whimsical restaurant with a menu of local favorites.  Having trouble with some jetlag?  Feel free to explore the town afterwards or hang out at the station and watch the parade of passing trains. 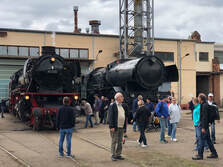 Sunday, September 5:  The Steam Locomotive Repair Facility at Meiningen is our first event.  The facility holds an open house once a year on this weekend, featuring steam train rides, a big model train flea market, and access to the entire facility.  Dozens of historic trains are featured both in front of the roundhouse and scattered around the large grounds.  The vendors inside sell everything from railroadania to model trains and accessories.  There are even a couple of layouts from local model railroad clubs to admire.  The event is open both Saturday and Sunday, so those arriving a day earlier are welcomed to go 'scope it out' for the rest of us 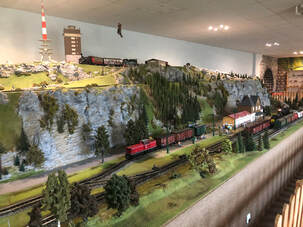 Monday, September 6:  Today is a travel day, with a treat in-between.  We'll be headed to Wernigerode at the edge of the Harz Mountains.  On our way we'll be stopping at a large collection of model train layouts and exhibits in a variety of scales at Modellbahn Wiehe.  A gigantic HO layout featuring East Germany is the centerpiece, but only a small part of the collection, which fills several massive halls.  A G-scale layout featuring the Harz Mountains is a great intro to our next destination, and a tour of Europe is featured in TT with all the stops of the Orient Express.
We arrive in Wernigerode in time to watch the evening steam train arrive, a sight we get to enjoy from the steps of our hotel, the Hotel Altora.  Our dinner this evening is in the hotel's train-themed restaurant, featuring a G-scale beer delivery system!

Tuesday, September 7:  The beauty of the Harz Mountains are at our disposal today, with a steam train ride up Germany's highest peak outside the Alps, the Brocken.  If the sky is clear the view is spectacular, and if it's not, the museum at the summit, located in the former East German and Russian spy complex, is certainly worth the trip!  We'll take the train back down the mountain, enjoy lunch along the way, and return to Wernigerode.  After a walk through the picturesque town of Wernigerode we'll enjoy dinner at the Hexenkessel, or Witch's Pot, part of a local Harz legend... 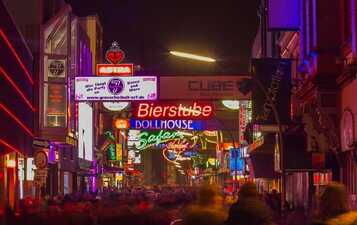 Wednesday, September 8:  After 'breakfast with a view' at the hotel, it's time to pack up and head to Hamburg.  We have about a four-hour trip with a couple of changes along the way before we get to Hamburg.  A short walk from the Hamburg-Altona station gets us to the hotel.  After getting unpacked and taking some time to relax, it's off to the Reperbahn, Hamburg's entertainment district, with bars, nightclubs, and discotheques.  Dinner is in the relaxed atmosphere of the Astra brewery on the 'sinful mile'.  Yes, it's also Hamburg's famous 'red light district'.  But we don't plan to stay too late- tomorrow is a trip highlight... 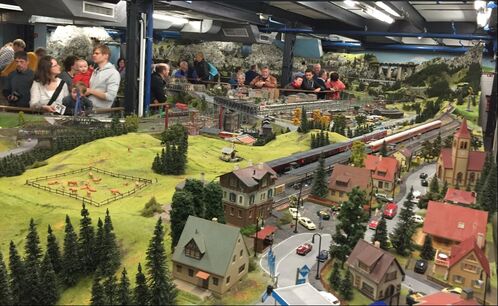 Thursday, September 9:  It is the biggest attraction in Germany, beating Oktoberfest in annual attendance.  And it's a model railroader's dream.  Miniatur Wunderland is more than just an HO scale train layout- encompassing over 25,000 square feet it's a technological marvel in miniature.  Will its latest addition of South America be open by September?  Will the Formula One cars be racing in the new Italy section?  We shall see!  Aside from spending hours enjoying the scenery and trains, we'll jump on a behind-the-scenes tour, allowing us to see the technology behind the mving car system, the ships sailing on the real-water fjord, and the airplanes landing and taking off at the HO-scale Knuffingen Airport.  Enjoy the layout with its thousands of vignettes as long as you want- you have all day to enjoy the layout.  Grab lunch at the MiWuLa cafeteria, and head back to the layout for more.
When you're done admiring the layout you'll have the 'Hansestadt' at your disposal.  Do some model train shopping at one of several stores, or head to the Hamburg History Museum to admire the large 1-scale layout.  The city is yours, and your city ticket gets you anywhere you want to go.

Friday, September 10:  It's our last day in Hamburg, and both trains and boats are on the itinerary.  After a short train ride we'll get a tour of one of the largest freight yards in Europe, the amazing marshalling yard at Maschen.  In the afternoon, join us for a tour of Hamburg Harbor, one of Europe's biggest.  We'll explore the harbor and some of Hamburg's waterways and be awed by the massive ships in the harbor.  The guided tour aboard ship is in English for everyone's benefit, and will drop us at the famous 'Landungsbrücken' where we can grab some dinner.

Saturday, September 11:  We'll board our Intercity in Hamburg Altona late morning and spend the next four hours cruising across Germany, arriving in Koblenz in the mid-afternoon.  After checking into our hotel we have a special event in the evening- the Oberwesel wine festival, featuring a lighted boat parade on the Rhine, live music, food and wine street vendors, and culminating with a 'Rhine in Flames' fireworks show.  It's an easy train ride from Koblenz, and a great start to our time on the Rhine!

Sunday, September 12:  The DB Museum in Koblenz is our first stop today, just across the Mosel from our hotel.  Its collection of diesel and electric locomotives, plus historic rolling stock, sits alongside the main line from Cologne to Frankfurt, offering plentiful train traffic as we admire the museum's locomotives and train cars.  In the afternoon we have been invited to visit a large private layout and model train collection in Frankfurt, which means we'll get to enjoy the railway line as it winds its way down the castle-strewn valley next to the Rhine.

Monday, September 13:  The Cathedral City of Cologne is about an hour up the line, and our destination for today.  We'll get to visit the massive cathedral, just outside of the train station, which is also the beginning of the large pedestrian and shopping district.  A tour of the Frueh Koelsch brewery is on the itinerary this morning, and the afternoon is open to explore the city, or perhaps set off on your own or in smaller groups.  Want to ride the Schwebebahn in Wuppertal and visit Matschke?  No problem!  Maybe you'd like to take the Thalys to Aachen, and visit Charlemagne's castle.  Finally, Cologne has several excellent railfanning spots for freight and passenger traffic, all great options for groups of us to spend the afternoon. 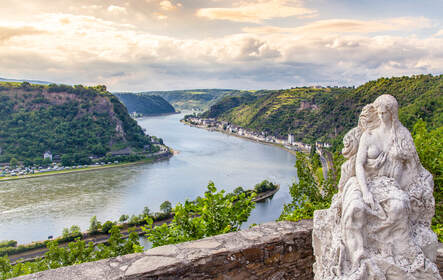 Tuesday, September 14:  Today's pace will be a little more relaxed as we take in the beauty of the Rhine valley.  A short walk to the river from our hotel in Koblenz is followed by a ship ride up the Rhine.  The beauty of the valley is augmented by the railway lines on both sides, so railfanning is possible even here.  Enjoy time on the upper deck sitting in the sunshine or head below for coffee and a slice of apple strudel.  Upon arriving in St Goarshausen a bus takes us to the top of the Loreley, the storied outcropping of rock above the treacherous waters of the Rhine.  From this vantage point the valley looks like a model railway, and we'll spend some time enjoying the rail traffic below.  Afterwards we'll catch the bus back down into town (the adventurous are welcomed to hike down to the valley floor and check out the famous Loreley railway tunnel portals) where a train will whisk us back to Koblenz for our last dinner in this part of Germany.

Wednesday, September 15:  The 'Märklintage' are only a couple of days away, so it's time to make our way down to Baden-Württemberg.  We have all day to get there, so a leisurely morning is followed by a train ride back down the Rhine to Esslingen via Mannheim and Stuttgart.  We're back at the Hotel am Schelztor, and after checking in we have a special treat- a trip to the Privater Modellbahnvereinigung Winnenden, one of the largest model railroad club layouts in Germany. 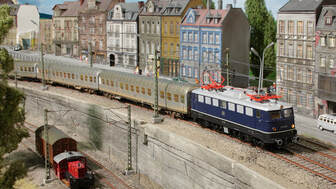 Thursday, September 16: It's the eve of the big event, and the day is open to explore new locations or revisit past ones.  We're hoping to get a group together to visit Modellbahnwelt Odenwald, a large collection of model train layouts two hours away.  If you still haven't found that particular model train or accessory, Eisenbahn Treffpunkt Schweickhardt near Stuttgart is the only model train store so big you'll want a shopping cart to carry your haul (yes, they have them).  Done with trains for a while?  Porsche and Mercedes both have museums in Stuttgart, while those ready for an extended break might choose to take a shipride down the Neckar river, with boarding locations as close as Esslingen itself!

Friday, September 17:  The Marklin Days await!  Goeppingen is a short train ride from Esslingen, and Friday tends to be the least crowded day.  With multiple venues and easy transfers by city bus (free with the admission cost) you'll likely spend all day enjoying the exhibits and displays of layouts.  The constant traffic through Goeppingen station along with the historic trains parked there insure that any train enthusiast's heart will beat faster!  Take a train ride up the Geislinger Steige in historic coaches behind a steam locomotive, or ride the authentic railbus from Goeppingen station to one of the venues.  There is so much to see and do- too much to list here.  It is truly the most important event for any Marklin, Trix or LGB fan, and pretty amazing for any train enthusiast! 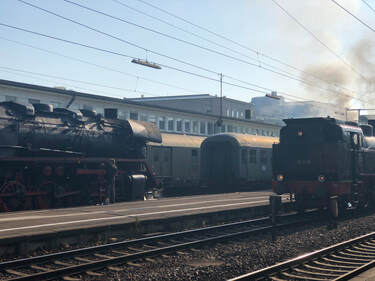 Saturday, September 18:  We wrap up the tour with a second day at the Marklin Days event.  We're in the process of trying to arrange a tour of the Marklin factory, which was a highlight from our 2019 trip for anyone who hasn't gotten to do so.  If you haven't had a chance to visit all the venues or admire all the layouts, today is a good day to do just that.  Or spend a couple of hours standing on the open platform of a thunderbox on a steam train ride to Stuttgart and back.  Seen all there is to see?  Eisenbahn Treffpunkt Schweickhardt has their annual garden railway festival this weekend, so feel free to grab the S-bahn to Waiblingen to go check it out.  The garden railway is MASSIVE, and dozens of LGB enthusiasts will be there, running their prized models, including live steam.  This evening we'll have a final group dinner together, but don't feel like you have to jump on the first plane home.  There is another day of the Treff, and if your interests are more 'grains' than 'trains', the Oktoberfest is in full swing!